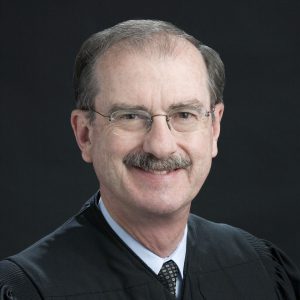 It is with sorrow that we report that retired Magistrate Judge Howard R. Lloyd passed away on July 7, 2022. He was 80 years old. Judge Lloyd was a federal magistrate judge for the United States District Court for the Northern District of California appointed in June 2002. He was a member of the Ninth Circuit’s Magistrate Judges Education Committee from 2006 to 2009. Judge Lloyd retired when his second term ended in June 2018 after presiding over more than 1,300 cases. He handled a myriad of cases involving some of the most recognized names in U.S. and world industry, including Adobe, Ford Motor, Wells Fargo, Bank of America, Safeway, Deutsche Bank and Autodesk.

Judge Lloyd received his Bachelor of Arts from the College of William and Mary in 1963 and then served in the Army Intelligence Corp as a 1st Lieutenant from 1963 until 1965. He received his Juris Doctor from the University of Michigan Law School in 1968. Prior to joining the U.S. District Court, Judge Lloyd spent 30 years at the law firm Hoge, Fenton, Jones and Appel (HFJA) starting in 1969. He ended his 30-year career as a business litigator focusing mainly on intellectual property and employment disputes.

Between 1999 and 2002, Judge Lloyd was an independent alternative dispute resolution provider. He ran Mediation Works, a Silicon Valley-based private mediation outfit. Prior to that, he served in the Northern District’s early neutral evaluation program. During his time as a judge, he also taught the judicial extern class at Santa Clara University School of Law.

“I had the privilege and pleasure of serving with Judge Howard Lloyd for many years as his next-door neighbor in the San Jose federal courthouse,” said Judge Richard Seeborg, chief judge of the Northern District of California. “Howard was a person of keen intellect and sound judgment who, beneath a sometimes-gruff façade, possessed a finely tuned sense of humor and spirit of good fellowship. He was an original who will be missed.”

Magistrate Judge Nathanael Cousins, United States District Court for the Northern District of California, stated, “Howard was well-known to the legal community for his thorough orders and dry wit. Although he did not like to be the center of attention, I remember him as the gracious master of ceremonies for the Court’s holiday parties. Howard served the Court and community with precision and professionalism.”

Paul Grewal, former judge and current chief legal officer and corporate secretary for Coinbase said, “Judge Lloyd was a good man and a good judge who did his job so well and without fanfare—the type we don’t celebrate enough in our star judicial culture. I will miss your irascible wit, Howard.”

Scott Mosko, a former colleague of Judge Lloyd’s at HFJA added, “As a mentor and hard-to-please partner in my first law firm (circa 1985), Howard demanded precision. There was more red ink on the papers he returned than black print. I understand he continued that approach as a judge. As a friend, no one was more devoted. I’ll miss his wit, and Groucho Marx-like appearance.”

Former HFJA partner, Tom Denver noted, “Howard Lloyd was the finest teacher of good legal writing I have known; his red ink edits made an impression. Howard’s sense of humor was sly, dry and a great deal of fun. He had a brilliant legal mind and used it to help young lawyers and clients alike.”

“Judge Lloyd was a wonderful colleague both as a law partner and a fellow judge,” said Senior District Judge Ron Whyte. “We first met in 1971 and have been lifelong friends. He was an excellent lawyer with great writing skills. He believed in a ‘tell it like it is, no frills, speak in plain English’ style. He was thoughtful and well-reasoned and a constant mentor to his law clerks.”

Judge Lloyd was well known for his HO scale model railroad passion. Specializing in urban and harbor scenes, Judge Lloyd built and maintained large layouts of a fictional New Jersey city set in the mid-1940s. His intricate and detailed work has been featured in top collector magazines, such as “Model Railroader,” “Narrow Gauge,” and “Short Line Gazette.” His love for the hobby started at an early age with his grandfather taking him to the train tracks in Bayview Park, New Jersey, and a high school teacher introducing him to the world of model railroading.

Judge Lloyd was an active volunteer in the community, working with students at Lincoln High School for many years and as a Child Advocate of Silicon Valley volunteer mentoring two young men in the Dependency Court system after his retirement from the court.

Over the years, Judge Lloyd loved spending time at the family’s vacation home located at The Sea Ranch in Northern California. He was an avid Pinochle player and would teach anyone who had the patience to learn. In the 1980s and early 90s, Judge Lloyd also played league racquetball with his son. Throughout his adult life, Judge Lloyd loved dogs and always included them as members of the family. His favored breed, Bouvier des Flandres, were treated as equals in the Lloyd family and Judge Lloyd took great pride in training and caring for them. He was a kind, witty, thoughtful, caring man who will be missed by everyone who knew him.